What book is this? 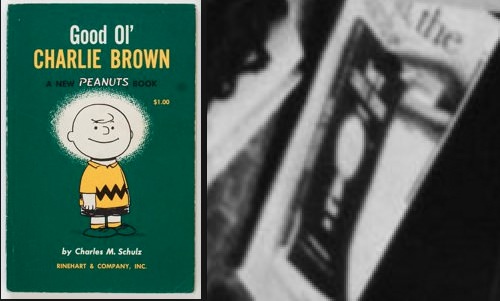 I too thought it was a keyhole with a face.

Pretty sure I saw a sc-fi paperback with a cover kind of like it. The face/keyhole that is.

Now, back to these?

"Rupert Loewenstein discovered I liked reading, and one book led to a library’s worth over the years..."

The attachment matchbox1.jpg is no longer available Alvaro outside his hip Restaurant at Kings Road 124, from 1966 to 1970, in the
middle of Swinging London Age

"...Once a hip young Brit of ‘66 was bedecked in some Chelsea finery—whether the disposable chic of Biba or the near-couture of Bazaar or Hung On You or the ironic outrageousness of Granny’s or Lord Kitchener’s, with boots, naturally, from the Chelsea Cobbler—he or she simply had to promenade. King’s Road, once a place where people marketed and talked about the weather with neighbours and shopkeepers, became a parading ground for the city’s young loons. On any given day, the free spirits could be seen darting in and out of boutiques or the handful of coffee bars and pubs along the street. Saturday, however, was a holiday of nonconformity. From Sloane Square to World’s End and back, the young scenesters flaunted themselves in a game of sartorial oneupmanship and sexual provocation, the boys in whatever queer gear they could lay their mitts on – Arabian, Chinese, American Indian – the girls in skirts that seemed to rise and rise with each step: ‘All the young, stoned harlequins,’ as John Pearse put it.
It became the world’s most colourful and outrageous pageant – and it wasn’t only fashionistas out to impress one another or get laid. Along with the boutiques there came restaurants and clubs catering to the celebrity crowd who were living and shopping in the area. Among the hippest was Alvaro, the restaurant opened in April 1966 by Alvaro Maccioni, the former head waiter of the Trattoria Terrazza; so chic and exclusive was the new place, Maccioni explained, that ‘I had a telephone ex-directory. The visiting cards and matches had a picture of me with my finger up to my lips – “Sshhh!” – and it said, “If you know who I am, don’t say where I am.” And there was no address, no telephone number, no name, nothing’..."
Top
Post Reply
82 posts

Users browsing this forum: No registered users and 5 guests